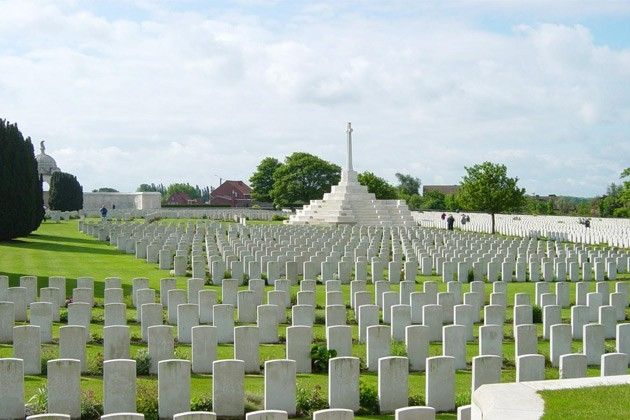 Make your own way to London St. Pancras for your lunchtime departure by Eurostar to Lille where you will be met and transferred to our hotel in Belgium for a three-night stay

The tour starts in Flanders around the Belgian city of Ypres. Here, one in three of Britain’s Western Front dead fell by 1918 and it has been a place of pilgrimage ever since. We begin by looking at the commemoration of Britain’s dead at Tyne Cot Cemetery, the largest British war cemetery in the world, taking time to also see the visitors’ centre. At Vancouver Corner we examine the use of gas in the trenches and see the moving ‘Brooding Soldier’ memorial to the Canadians who defended Ypres in 1915 and at Langemarck German Cemetery we see how Germany commemorated her dead and look at the story of ‘Fritz’ on the other side of No Man’s Land. After lunch at Hooge, we visit the preserved trenches at Sanctuary Wood Trench Museum, some of the last original WW1 trenches still surviving in Flanders together with an amazing collection of relics and stereoscopic photos. We then travel down the Messines Ridge to Ploegsteert to see the Ploegsteert Memorial to the Missing. Our day ends in Ypres where we attend the moving Last Post Ceremony at the Menin Gate Memorial, held at 8pm each evening. (B)

The Battle of the Somme began on a summer’s day in July 1916 and ended in a snowstorm four and a half months later. It was a battle of contrasts from the blackest day when 57,000 became casualties to the first use of tanks and the change in approach to fighting on the Western Front. We look at all these stories and start our tour at Peronne where we visit the excellent Historial de la Grande Guerre museum which helps to put into context not just our Somme day, but the whole tour. We then see the Lochnagar Mine Crater at La Boisselle, the largest British mine crater surviving on the battlefields. After lunch we see the trenches in the Newfoundland Park and then take time to visit the Thiepval Memorial to the Missing and see the new Somme Museum here. (B)

Transfer to Lille then return home, via Eurostar to London St. Pancras and make your own way home. (B)

Leger Holidays
All Quiet On The Western Front by Eurostar

Travel by Eurostar from London St. Pancras then spend two full days touring the battlefields of Flanders and the Somme on a deluxe Silver Service coach before returning to the U.K. by Eurostar.

All battlefield tours are accompanied by an expert guide, so you can be assured of not just learning about the how and why, but also some of the personnal stories too. Discover the stories, tragedy and bravery of the First World War Battlefields of the Somme and Flanders.

You will stay for three nights at the 4-star Best Western Hotel Alize in Mouscron. The hotel does not have a restaurant, but snacks are available from the bar. There are also a number of restaurants and bars nearby.

All Quiet On The Western Front by Eurostar