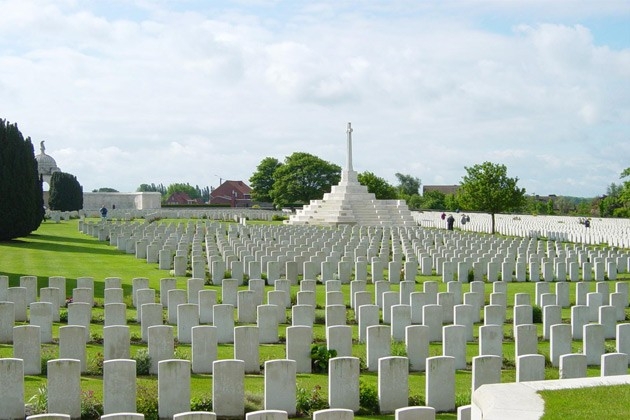 Tour Itinerary - They Called It Passchendaele

Local departure by coach then to Ypres for a four-night stay.

Today we look at the Battle of Messines in June 1917 when British and Commonwealth tunnellers exploded nineteen mines under positions along the Messines Ridge. We start at Hill 60 where two mines were blown, seeing the impressive Caterpillar Crater. At St. Eloi we visit the crater formed by the largest mine from 1917 and at Wytschaete visit the Tunnellers Memorial. At Spanbroekmolen mine crater we examine the story of the Ulster troops who attacked here and also visiting the Lone Tree Crater Cemetery. After lunch at Hooge Crater we travel along the Messines Ridge to Messines itself, seeing the visitors centre, visiting the New Zealand Memorial, and seeing German front line bunkers. We remember the contribution of Irish soldiers at the Irish Peace Tower and visit the southern area of the battlefield around Ploegsteert ('Plugstreet') including the Ploegsteert Memorial. (B)

Following Messines, the Third Battle of Ypres began on 31st July 1917 and we begin at Buffs Road Cemetery, close to the start line. We then travel to the Pilkem Ridge to look at the story of war poets Francis Ledwidge and Hedd Wynn, also seeing the Welsh Memorial. At Langemarck we see the memorial to Harry Patch, the ‘Last Fighting Tommy’ and at Poelcapelle examine the use of tanks during Third Ypres, seeing the tank memorial. After lunch we visit the superb Passchendaele Memorial Museum at Zonnebeke, exploring their reconstructed trench system. At Tyne Cot we visit the largest British military cemetery in the world and end on the Frezenberg Ridge. (B)

The Third Battle ;of Ypres ended with the capture of Passchendaele and today we start at the Canadian memorial at Crest Farm before going into the village to see the memorial in the church. We then take time to visit the Flanders Fields Museum in Ypres and after lunch look at life behind the lines, seeing Lijssenthoek Military Cemetery, before going to Talbot House in Poperinghe. We then look at the story of men ‘Shot at Dawn’ at the Death Cells, and at Brandhoek the grave of medical officer Noel Chavasse VC & Bar. We end the day in Ypres for the Last Post at the Menin Gate. (B)

Leger Holidays
They Called It Passchendaele

One of the iconic battles of World War 1, join Leger on a journey of discovery, visiting the battlefields of the significant Battle of Passchendaele.

You will stay for four nights at the 3-star Novotel Ypres. This excellent hotel is located in the heart of historic town of Ypres, only a couple of minutes' walk from the Menin Gate Memorial, where the 'Last Post' is sounded every evening. All the comfortably furnished bedrooms are en-suite with television, telephone and air-conditioning. The hotel has a small bar area.

They Called It Passchendaele