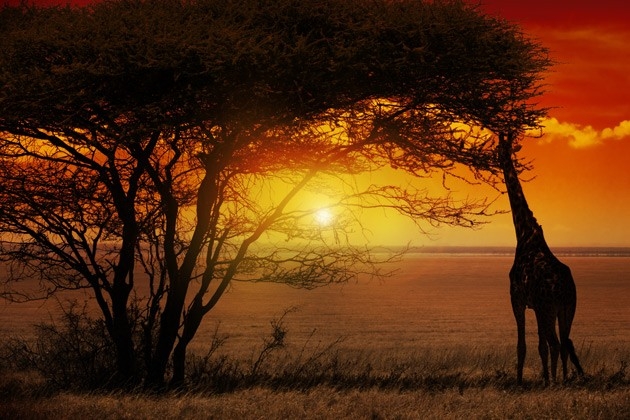 Travelsphere’s Private Chauffeur Service collects you from home for your flight to Windhoek, Namibia. On arrival we'll transfer you to your accommodation for an overnight stay.

Windhoek, Namibia's capital city, is an oasis in the desert – it's clean, modern and organised, perhaps a legacy of its German colonial roots. It is also distinctly, undeniably African, and it's this mix of cultures that makes it such a fascinating city to explore. Today, you'll be met by a Local Guide who will introduce you to the city with a short orientation tour. Look out for the Christuskirche, Windhoek's best recognised landmark – a German Lutherian church constructed from local sandstone in 1907. Its mix of architectural styles gives it a sweet, somewhat 'fairytale' look, and it's even been compared to a gingerbread house.

Later, we'll head for the Namib Desert and the stunning red dunes of Sossuvlei, and arrive at our lodge. This afternoon, you might wish to join an optional nature drive in the grounds of the lodge. Dinner this evening is served under the Namibian sky. B,D

We set off early for an exciting morning exploring the breathtaking landscapes of Sossusvlei. You'll understand why this destination is so popular with photographers and artists when you are greeted by the sight of some of the tallest dunes in the world, rising to more than 200 metres high. Surpassing even the heights of the dunes in the Sahara, these unique star-shaped sandbanks shimmer in multiple tones of red. You'll get the chance to observe them close-up as the changing angles of the sun colour them from warm apricot to deep red and all shades in between. Board a 4x4 shuttle for a closer look, where you'll have the chance to climb these awesome dunes and explore the dazzling white surface of the Deadvlei – the clay pans that offer such a sharp and spectacular contrast to the nearby dunes. Continue towards the stunning, other-worldly landscape of Sesreim Canyon, which was shaped by the once-mighty Tsauchab River over millions of years. Up to 30 metres deep at points, this majestic gorge features some stunning rock formations. B,D

​Head towards Namibia's cool, refreshing coast this morning, on a journey that will take you through the northern edges of the stunning Namib Naukluft Park. Here, you'll be able to view the incredible Welwitschia Mirabilis, a plant said to grow for 2,000 years and yet only produces two leaves in its entire lifespan. It's somewhat alien in appearance – so it's a good warm-up for the 'lunar landscape' you'll visit next on your tour – a series of eroded hills and valleys that are now a firm favourite with the film industry. This stark, bare and inhospitable-looking area was once a high mountain range, eroded downwards over time, to leave this eerie but fascinating landscape.

Later, we visit Swakopmund, a delightful coastal town nestled between desert and sea, where lush green lawns, palm trees and carefully-maintained gardens are the order of the day. Established by German colonists in 1892, there's a unique charm to Swakopmund's faded elegance, as demonstrated by graceful buildings like the Swakopmund Railway Station, now a hotel. Spend some time soaking up the atmosphere in preparation for further exploring tomorrow. B

Don't be surprised to wake up this morning to find quaint, colonial Swakopmund covered in desert fog – but this should soon melt away, revealing the town's pretty, palm tree-fringed promenade and well-preserved buildings. Perhaps you'll visit the museum at the base of the lighthouse to learn more about Namibian history, and look out for the prominent tower of the German-style Woermannhaus, declared a national monument in 1976.

Alternatively, you might like to join a morning cruise from nearby Walvis Bay, where you could see anything from flamingos and pelicans to dolphins and seals. There's also the chance to join a Living Desert tour, a unique 4x4 adventure that highlights the variety of perfectly adapted wildlife that makes its home here. B

Today we'll move inland towards Damaraland – home to the desert adapted rhino and elephant. This is one of Namibia's most scenic areas, with open plains, granite hills and deep gorges. Our next stop is the UNESCO-listed site of Twyfelfontein, which has one of the largest collections of rock paintings and engravings in all of Africa. B,D

Today is a leisurely day at Twyfelfontein, where you can marvel at the rock carvings, thought to have been created by the ancient San people to indicate good hunting grounds nearby. You'll also get the chance to visit the nearby geological phenomenon that is Burnt Mountain, a ridge of volcanic rock that really does appear burned. Nearby, the Organ Pipes are not to be missed – an impressive series of basalt rock columns gouged out by a river. There's also the chance to join an optional excursion to the Damara Living Museum if you wish, where you can learn about the traditional culture of the Damara, originally hunter-gatherers and one of the oldest nations in Namibia. B,D

Your first stop this morning is the eerie, but unmissable, Petrified Forest, a national monument which was first discovered by two farmers in the 1940s. Featuring fossilised tree trunks estimated to be at least 200 million years old, the trees – now exposed – were once covered in sand and mud, which prevented them from decomposing.

We then head to your next base – Etosha National Park, a vast game reserve, which is home to an array of exotic animals, reptiles and birds. B,D

Enjoy a full day of game viewing at Etosha National Park today, where your air-conditioned touring bus will provide both comfort and a spectacular view as you visit different waterholes to observe the animals in their natural habitat. The park, which was proclaimed a game reserve in 1907, is home to 114 species of mammal and four of the so-called Big Five – elephants, lions, rhinoceros and the elusive leopard.
Spanning an area of 8,600 square miles, the park gets its name from the huge Etosha pan, a 75-mile-long dry lakebed almost entirely contained within the reserve. It is home to hundreds of species of mammals, birds and reptiles, including several threatened and endangered species such as the black rhinoceros. B,D

Later in the day, we'll leave the park and arrive at our overnight lodge in time to spend the afternoon relaxing by the pool. B

As we head back in the direction of Windhoek, there's a chance to visit the museum at Tsumeb en route today, to learn about the history of the Tsumeb mine, renowned for its rare and unusual minerals. We'll then arrive at our overnight stop on the Midgard Estate, where there's plenty of time to relax. B,D

Spend the morning relaxing before transferring to the airport for your return flight to the UK. B

You'll arrive back in the UK today. Upon arrival, your Travelsphere Private Chauffeur Service will be waiting for the journey home.

Additional Information : Please note: To make the most of this thrilling destination there are early starts and long distances are covered, sometimes on uneven roads.

To book this tour online or to check departure dates and prices click HERE. Or to request a brochure click HERE.

Stunning, other-worldly landscapes, ancient cultures and the chance to see four of Africa's 'Big Five' in their natural habitat are among the highlights of this exhilarating tour. Dine under the Namibian sky, marvel at the diverse natural beauty of the environment and learn more about the ancient peoples that still influence this special country today. Namibia, with its cooling coastline, dramatic desert and abundance of wildlife is Africa in a nutshell – a country of contrasts, from the colonial order of its cities to the unspoilt wilderness beyond. You'll experience it all on this unmissable tour. 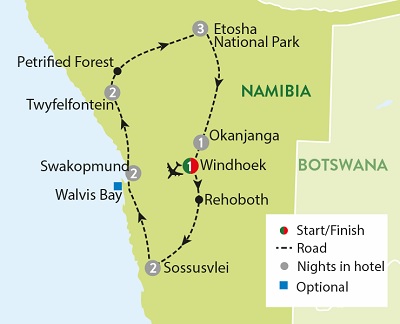 Day 3 - 4: Soussusvlei Lodge  The Sossusvlei Lodge is situated at the entrance gate to the Namib Naukluft Park with views over the surrounding landscape and the nearby flood lit waterhole. Facilities include a swimming pool, bar, beer garden, restaurant with outdoor terrace and sundowner deck - designed to make the most of the inspiring views of the ridges of the Nauluft Mountains.

Day 5 - 6: Strand Hotel Swakopmund The Swakopmund Hotel is located in the old station building, an excellent example of the local German architecture, but with all modern comforts. Facilities include a swimming pool, gift shop, restaurants, bar and fitness centre. Guest rooms have air-conditioning, TV, tea and coffee making facilities, en-suites and hair dryer.

Day 7 - 8: Damara Mopane Lodge Damara Mopane Lodge is the perfect hotel to begin exploring Damaraland in north-western Namibia. The main building and chalets of the lodge have been designed to look similar in style to those of an African Village, and are built under the shade of Mopane trees.

At Etosha Village nature and luxury are in perfect harmony through design and comfort. The individual luxurious units offer a spacious air-conditioned bedroom and a modern en-suite bathroom with shower. The patio and outside seating area create an ideal space to sit back, relax and enjoy the beauty that surrounds you.

Mokuti Etosha Lodge As the closest lodge to Etosha National Park, Mokuti is only 4 minutes’ drive from the eastern Von Lindequist Gate near the historical Namutoni Fort and is located on its own private 4.000 hectare nature reserve, which shares a common border with this fascinating wildlife reserve. Our rooms are available as standard, luxury and luxury family rooms. 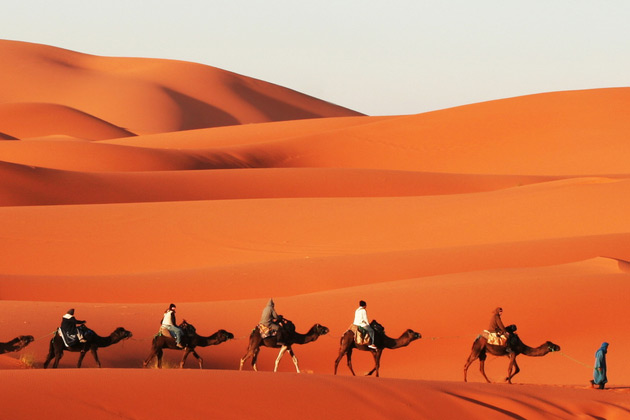 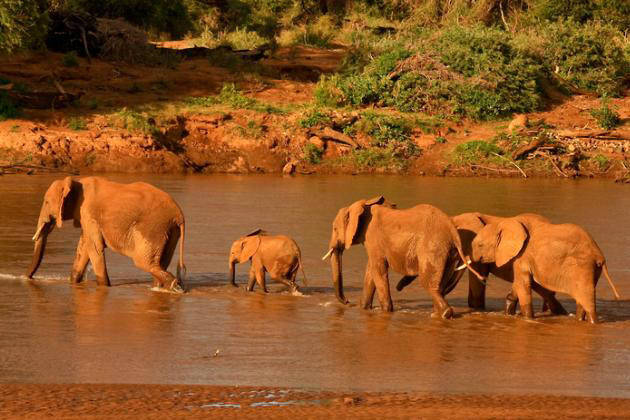 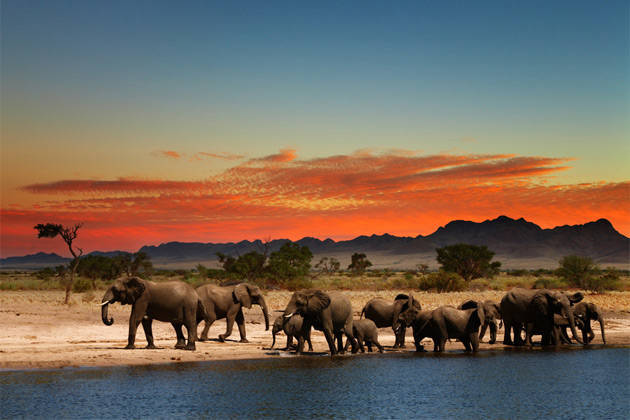