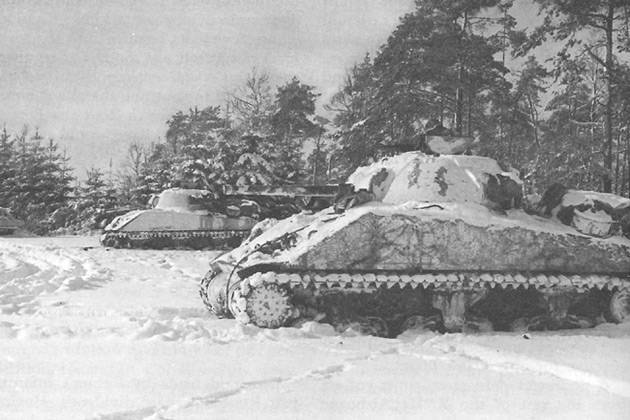 Departure by coach then to Liège for a three night stay.

We start our tour at the massive Henri-Chapelle American Cemetery. We then move on to an area where the ‘Battle of the Bulge’ started, seeing the front line positions close to the Siegfried Line at Hollerath. Here we see Dragon’s Teeth anti-tank defences, trenches and foxholes and memorials to both the German and American troops who were here in December 1944. We then follow the story of Kampfgruppe Peiper and look at the sad story of the Malmedy Massacre. We follow Peiper and his tanks into La Gleize where one of his mighty King Tigers still remains. (B)

We get an insight into the dreadful German losses in the Ardennes at the German cemetery in Recogne before following the ‘Band of Brothers’. We see where they attacked Foy and go into the area where their foxholes have been preserved in Bois Jacques, also seeing the Easy Company Memorial nearby. In Bastogne we visit the new 101st Airborne Museum. In the afternoon, we see where General Patton’s men and tanks linked up with the Airborne troops. At Mardasson we see the impressive American Memorial and Bastogne Historical Centre. (B)

Departure by coach then to Liège for a three night stay.

In December 1944 British troops were rushed to the Ardennes to help their much pressed American Allies. We start today at the Panther Tank in Houffalize. From here we see the British Memorial, an M10 Achillies tank and visit Hotton War Cemetery. We travel out to where the German advance was stopped at Celles, and visit the Battle of the Ardennes Museum in La Roche. (B)

Leger Holidays
The Battle of the Bulge

Specialist Battlefield Guide On Every Tour. Prices from only £299

Travel with Leger Holidays on this battlefield coach tour to the site of The Battle of the Bulge, a major German offensive launched through the forested Ardennes mountain region in Belgium.The Battle began on December 16th 1944. Convincing himself  that the alliance between Britain, France and America in the western sector of Europe was not strong and that a major attack and defeat would break up the alliance Hitler ordered the massive attack against what were primarily American forces.

The attack is strictly known as the Ardennes Offensive but because the initial attack by the Germans created a bulge in the Allied front line, it has become more commonly known as the Battle of the Bulge. Accompanied by expert battlefield guides, discover the facts and stories surronding this epic battle.

You will stay for three or four nights at the 4-star Globales Post Hotel & Wellness Liège. The hotel has a lift and bar.

Please note we may also use the 3-star Ibis Liege-Seraing.

The Battle of the Bulge