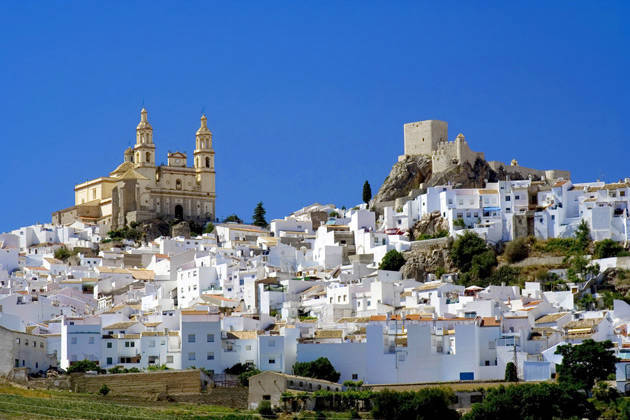 Holiday Itinerary A Week in Andalucia

Depart on your flight to Malaga. On arrival, we'll transfer you to your hotel in Antequera and you'll have time to relax and unwind before dinner this evening. (D)

If you want to experience authentic Andalucia, here it is in medieval Antequera, whose landscape is punctuated by the towers of Moorish fortresses and Gothic churches. To really get under its skin, why not join our optional guided tour. Highlights include the Roman Baths, the 16th century Arch of the Giants and the wonderful scenery of El Torcal National Park. You'll also discover the Dolmens, megalithic mass tombs dating back 4,500 years. (B, D)

Today we're going to discover the city of Cordoba, which sits in beautiful position on a bend of the Guadalquivir River. It's a fascinating place and the highlight of your visit is sure to be the dazzling Mezquita, or Great Mosque, which dates back to the 8th century. Inside what is said to be one of the world's greatest Islamic buildings, you'll see more than 850 granite, jasper and marble pillars. You'll also spend time exploring the labyrinth of winding streets and flower-filled courtyards in the Jewish quarter, before we head back to Antequera.​ (B, D)

We're heading to Seville today. This is Andalucia's regional capital, and if you're an opera fan you'll know it as the atmospheric setting for Bizet's Carmen and Mozart's The Marriage of Figaro. On your tour, highlights include the Plaza de España which displays a beautifully tiled alcove for each of Spain's provinces, and the Gothic cathedral. Admire the Alcazar, the royal palace built on the site of a Moorish fort, and wander through the Barrio Santa Cruz area. Tapas bars are plentiful in this maze of lanes, so maybe stop off to try a dish or two – Seville is credited with its invention after all. (B, L, D)

Time at leisure may be just what you need today, so why not relax by the pool at your hotel.
However, if you're keen to discover more of Andalucia, your Tour Manager will be hosting an optional excursion to the cliff-top town of Ronda. You'll see the 600ft deep gorge, El Tajo, which divides it in two and is spanned by an ancient stone bridge, the Puente Nuevo. We'll also leave time for a leisurely stroll around Ronda's cobblestone streets lined with the typical whitewashed houses of the region. (B, D)

You really can't visit this region of Spain without a trip to the stunning Alhambra Palace, and that's where we're heading today. Standing high on a hill overlooking Granada, this magnificent complex was built by the Moors in the 13th and 14th centuries and added to over time. Your tour not only includes the grand halls, courtyards and fountains of the palace, but also the lovely Generalife Gardens. Later, we'll explore Granada, where you'll see a mix of Moorish and Spanish architecture amongst its narrow, winding lanes.​ (B, D)

Choose to spend the day in Antequera exploring further or relaxing at leisure, or perhaps join our final optional excursion. This time we're off to Malaga, a cosmopolitan city on the Costa del Sol, famous as the birthplace of the celebrated artist Pablo Picasso. The city is set on a beautiful bay of the Mediterranean and we'll take in wonderful views from the two Moorish citadels, the Alcazaba and Gibralfaro. (B, D)

Your holiday comes to an end today as you transfer to the airport in Malaga for your flight back to the UK.​ (B)

To book this tour online and to check regional departures and prices click HERE. Or to request a brochure click HERE.

Travelsphere
A Week in Andalucia

This relaxing holiday gives you the chance to unwind and soak up the sun whilst discovering the best of Andalucía. From your base in medieval Antequera, you’ll visit the cities of Cordoba and Seville before heading to Granada, home of the stunning Alhambra Palace. Step inside to discover grand halls, courtyards and fountains, then explore the Generalife Gardens. If you want to see more, there’s the option to visit cliff-top Ronda and cosmopolitan Malaga, or if you prefer you can just relax and unwind at the hotel – it’s entirely up to you. 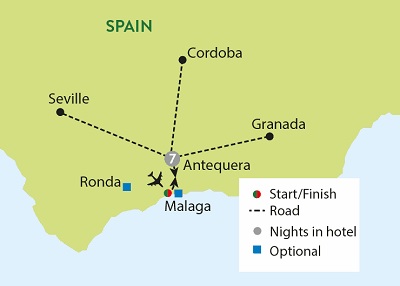 The 4-star Hotel Antequera Golf is ideally located in walking distance of the centre of Antequera.
Hotel facilities include a restuarant, bar, lounge and a swimming pool. Bedrooms have private facilities, mini-bar, hairdryer, safe, air-conditioning and a TV.

Antequera, El Torcal National Park and the Dolmens from £28

You can really appreciate these incredible rock formations, said to to have been formed by millions of years of volcanic activity, like being on the moon´s surface. El Torcal is the most geologically arresting of Spain´s national parks. A massive high plateau of glaciated limestone tempered by a lush growth of hawthorn, ivy and wild rose, it is just waiting to be explored. We also visit the Dolmens, enormous burial chambers dating back to prehistoric times.
Please be aware that walking shoes suitable for rough terrain will be required for this excursion, in addition warm clothes should also be worn.

Visit the cliff-top town of Ronda from £42

Take the opportunity to marvel at the scenery as we drive through the majestic Andalucian Mountains of southern Spain, to the cliff top town of Ronda. The city is said to be equal in Art, History and Beauty. Ronda in its heyday was an impregnable fortress town situated on a plateau 780 metres high in the south west of the Malaga province. Ronda is dominated by "El Tajo" the world famous gorge over 100 metres high.

Tour of cosmopolitan Malaga from £29

Take the opportunity to see the Birthplace of Picasso, the attractive, cosmopolitan city of Malaga lies on a beautiful sweep of bay on the coast of Andalucía. Blessed with sunshine and a spectacular quality of light, Malaga is a city of wide boulevards, swaying palm trees, good museums and many tapas bars. Sit back and relax as we include a panoramic tour of the city, seeing the beautiful Malagueño architecture, palm tree avenues and the main shopping area.

Little Trains of the Pyrenees 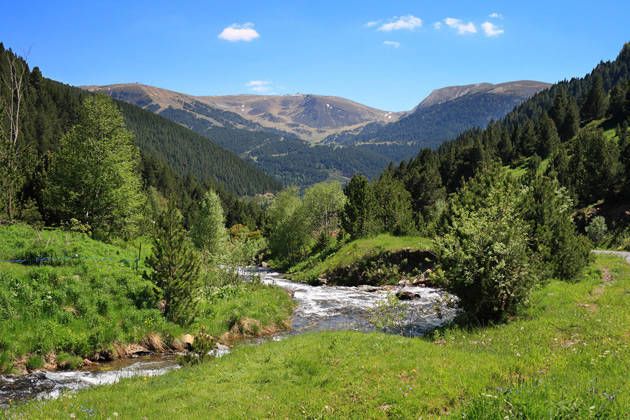 The Spirit of Andalucia - River Cruise 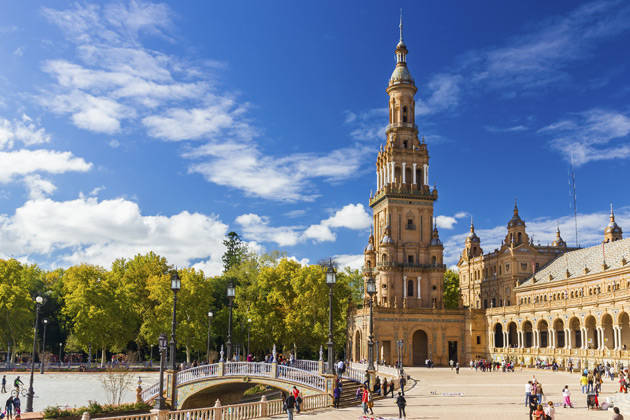 Discover the many highlights of Seville, Cadiz, Granada and more
more info

The Golden River Valley of the Douro 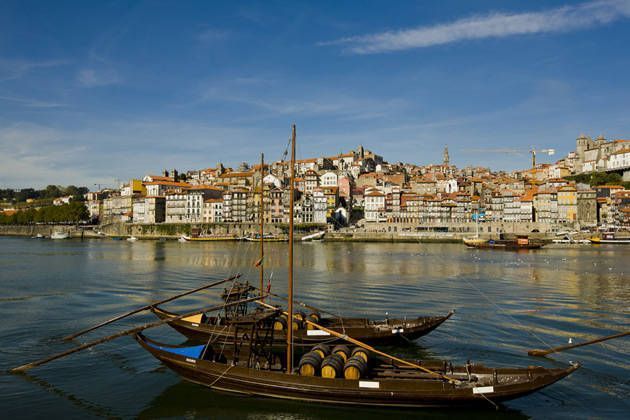 Relax as you cruise along the waters of Portugal’s Douro River.
more info 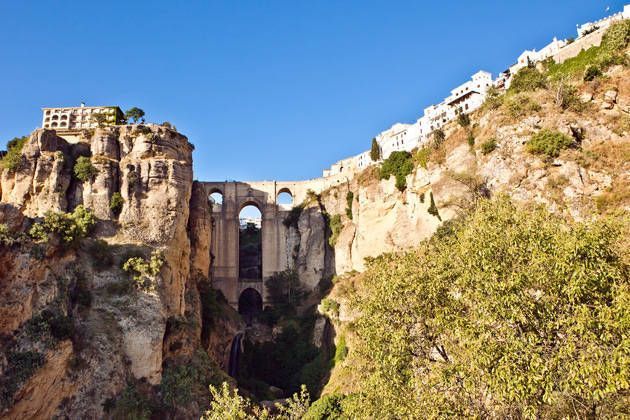 A Week in Andalucia