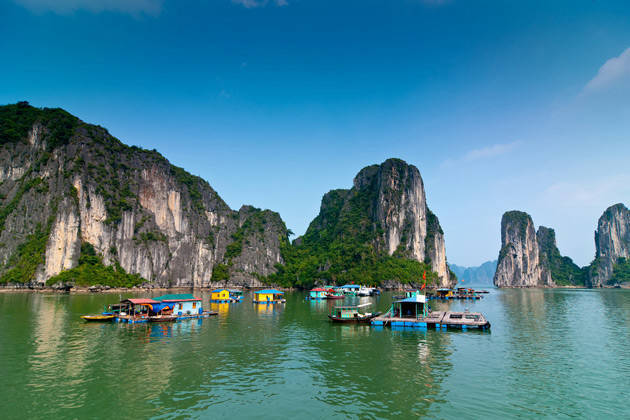 You’ll depart on your ovefnight flight to Hanoi today.

On arrival in Vietnam's capital, we'll transfer you to your hotel. A two-night stay will give you plenty of time to get to know the city. Tonight, we'll head to a restaurant for dinner.​

​Your sightseeing in Hanoi begins at the mausoleum where Ho Chi Minh, the president who was known as 'Uncle Ho', lies in state guarded by silent sentries. We'll then head to the Temple of Literature, a collection of courtyards, gardens and pavilions built in 1070 and dedicated to Confucius.
After a busy morning we'll be ready for lunch, which is served at a restaurant specialising in traditional Hanoi delicacies. Then this afternoon, you'll see even more when we head to the Ancient Quarter and board a trishaw – a traditional bicycle rickshaw. Sit back, relax and take in the sights as your driver navigates the bustling streets. After a short stop for a Vietnamese coffee, we'll continue on foot to Kim Ngan Temple, considered to be one of the oldest in the area.
You've a traditional experience to look forward to next – a water puppet show. After the performance our group will enjoy backstage access before we return to the hotel.

The beauty of Halong Bay cannot be underestimated, and after a lovely drive through green paddy fields we'll reach this UNESCO-listed site. You've the option to view the bay on a seaplane flight before heading to your unique overnight accommodation, a replica paddle steamer. We'll cruise through the dramatic limestone peaks that rise from the water and you'll be able to watch the sun set over the bay, before enjoying dinner on board.

You'll wake up to the beautiful surroundings of Halong Bay and watch the sun rise as coffee, tea and cookies are served on board. The rest of your morning is spent enjoying this unique destination, and may include activities such as kayaking and swimming, or visits to local markets and caves.
Later we will disembark the ship, make our way to the airport and fly to Hue.

​A full day in Hue means you'll get a real flavour of Vietnam's former capital. We'll start with a relaxing cruise along the Perfume River, which takes us to the Thien Mu Pagoda. Then, after a little time to look around, we'll continue to the citadel, the ancient seat of royal power. We'll explore the former Imperial Palace and learn more about the area's intriguing architecture, which was inspired by Beijing's Forbidden City.  By now you'll probably be ready for some lunch, so we'll stop to enjoy a vegetarian meal prepared by nuns. Later we'll visit the iconic Cat Tuong Quan Zen House, a haven of peace and tranquillity, set amid the Thien An Hill pine forest. Then finally, we end our day with a visit to the imposing tomb of Emperor Minh Mang, located in a beautiful setting surrounded by gardens and lakes.

Driving over the Hai Van Pass, possibly the most scenic of coastal road in Vietnam, our journey today takes us south to Hoi An. You'll be enchanted by this ancient riverside town, and after lunch we'll take a tour. Highlights include the Japanese Covered Bridge and a cruise on the Thu Bon River.

Today you will visit STREETS International's Oodles of Noodles project, a scheme which supports street kids and disadvantaged young people by providing them with training for a career in the hospitality industry. You'll meet some of the students, learn about different types of noodles and then have a go at making some yourself. Afterwards, a delicious lunch of Mi Quang noodles will be served.

Today we fly to Ho Chi Minh City, previously known as Saigon. You'll have plenty of time to explore during your two-night stay and will start with a tour of the city this afternoon. Highlights include the elegant Saigon Opera House and the Reunification Palace – a building linked to defining moments at the end of the Vietnam War. You'll also visit the War Remnants Museum, which documents wartime atrocities and the effect they had on Vietnamese civilians.

You're going to spend this morning discovering the Cu Chi Tunnels. This incredible network of underground passages was first constructed in the late 1940s by the peasant army fighting the French. They were later extended by the Viet Cong rebels, and you'll get the chance to head inside to explore. When we return to Ho Chi Minh City, the rest of the day is yours to discover more at your own pace.
This evening we'll enjoy a cruise along the Saigon River and dinner will be served on board.

Today's the day we start our discovery of the famous temples of Angkor. We'll fly to Siem Reap and begin our explorations with a visit to Banteay Srei, a pink-sandstone temple carved with intricate figures depicting scenes from Hindu tales. Next we'll visit Banteay Samre, before continuing to the world's largest religious monument – the magnificent Angkor Wat. This massive, three-tiered pyramid rises 65 metres from the ground and is crowned by five lotus flower-shaped towers. Finally we'll climb to the top of Pre Rup Temple and enjoy fabulous views of the jungle at sunset.

We've all sorts of exciting experiences lined up for today, beginning with a visit to the village of Chansar, which is supported by our Travelsphere Cares project. We'll see how work is progressing on the building of a kindergarten and then ride on an ox cart to the home of a Khmer family. We'll watch how they make brooms from natural materials and you'll be able to have a go if you wish. We'll enjoy a walking tour of the village and a simple Khmer lunch before we head to a Buddhist temple to receive a blessing.

Our final day of discovery begins with a visit to the South Gate of Angkor Thom. Our explorations uncover the Bayon, where hundreds of smiling faces decorate the towers and Phimeanakas, which we'll climb to take in panoramic views of the Angkor complex. We'll also take in the Terrace of the Elephants and the Terrace of Leper Kings before driving to Ta Prohm, a temple which has been left to the clutches of the jungle.
There will be time to return to the hotel and freshen up before we transfer you to the airport for your flight back to the UK, via Ho Chi Minh City.

You'll arrive in the UK today.

Travelsphere
Invitation to Vietnam and the Temples of Angkor

With its intoxicating floating markets, ornate Cham temples and unforgettable aromatic dishes, Vietnam is an all-out assault on the senses, a country blessed with an extraordinary beauty of mist-shrouded mountains, vibrant green forests and pristine beaches. Take in all its visual dramatics on this fascinating journey by air, land and river including an overnight cruise through Halong Bay.You will also explore the Angkor temple complex, visit the Cu Chi Tunnels and receive a blessing at a Buddhist temple.

Thang Lang Opera Hotel The Thang Long Opera Hotel is a stylish property that offers a great range of services, which wonderfully complement the hotel’s great location. There is an onsite Bar as well as two restaurants that serve both international and Asian meals. Guests can relax at the in-house Spa or exercise at the Gym. The hotel also offers free Wifi in addition to a 24 hour reception desk. The contemporarily styled rooms are air conditioned and are furnished with a safe, TV, private facilities and free toiletries.

Emeraude cruise ship is a charming vessel incorporating many aspects of comfort and luxury. Facilities on board include a restaurant, sundeck, bar. Cabins have private facilities, air-conditioning and a private shower room.

Emm Hotel - Hue  Located on Vietnam’s central coast, the UNESCO World Heritage-listed city of Hue is just a 20-minute drive from Phu Bai International Airport. Nestled in the heart of the former imperial capital, ÊMM Hotel Hue is the ideal base to discover Hue’s fascinating history and unique culture with the Perfume River and the Hue Citadel just a few minutes’ walk away. Emm Hotel Hue features 72 rooms with modern facilities including television, air conditioning, coffee & tea making facilities and hairdryer. The hotel also has a restaurant.

Hoi-An Silk Village Resort and Spa  This beautiful and distinctive resort is styled on a historical silk village. The wonderful features of this property include a large outdoor pool, a sauna as well as in-house gift shop, library and salon. The air conditioned rooms are fitted with a safe, TV, tea/coffee facilities and a minibar. Guests can also take advantage of the free WiFi and 24 hour reception.

Muong Thanh Saigon Centre Hotel The modern décor of this property is complemented by the abundance of great facilities on offer. Guests can unwind at the in-house bar or take advantage of the sauna/spa centre. There is also an indoor swimming pool that offers spectacular views overlooking Ho Chi Minh City. Rooms at the hotel come furnished with a TV, private facilities and a hairdryer. Finally, there is free WiFi available and the reception is open 24 hours.

Angkor Paradise Hotel is situated in the centre of Siem Reap only a short distance from the majestic Angkor Archaeological Park which includes the famous temple of Angkor Wat and Bayon. Facilities include a swimming pool, restaurant, health & fitness centre, lobby lounge and souvenir shop. Bedrooms have private facilities.

A Journey Through South East Asia 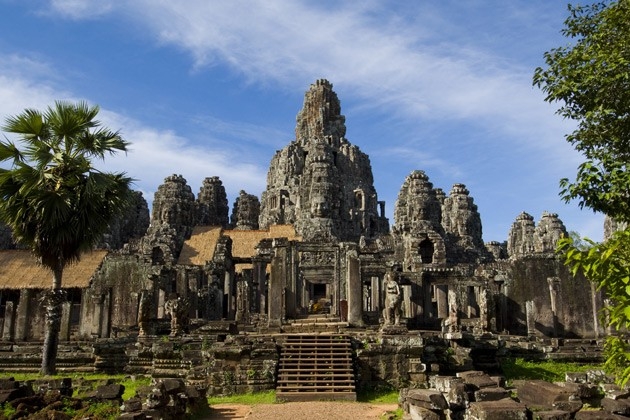 Vietnam, Cambodia, Laos and a cruise along the Mekong to Thailand
more info

An Invitation to Cambodia, Laos and Thailand 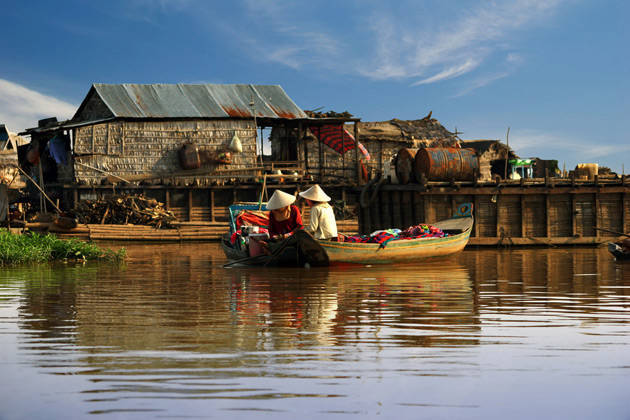 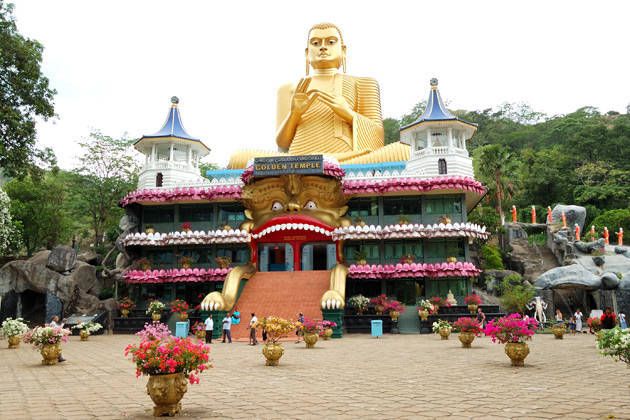 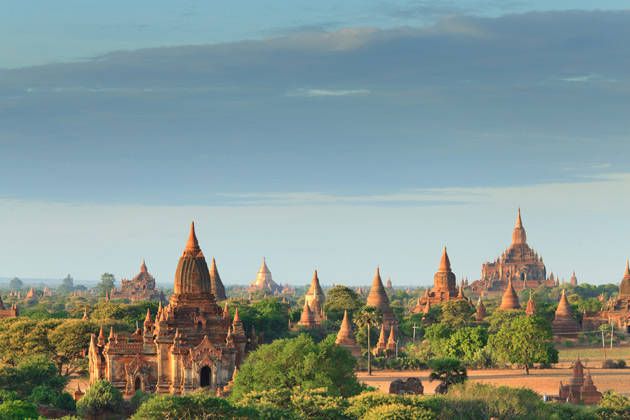 Invitation to Vietnam and the Temples of Angkor