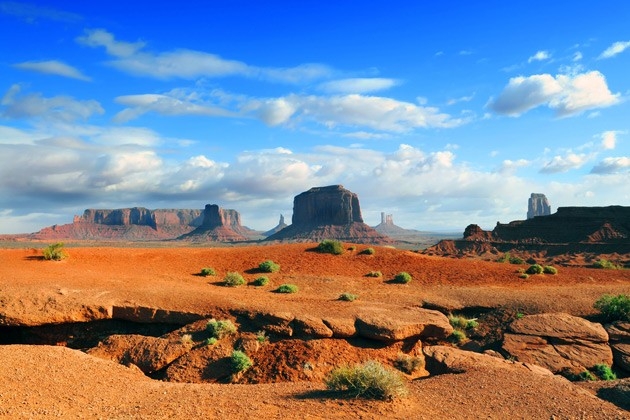 ​Depart on your scheduled flight to Denver today. On arrival we'll transfer you to your overnight hotel.​

Your adventure begins in earnest today with a journey to Rapid City. On the way we're going to stop at Cheyenne and the former military and trading outpost of Fort Laramie. This is where chief Red Cloud signed the treaty that gave the supposedly worthless Black Hills to the Sioux. Just six years later, Custer discovered gold in the Black Hills, prompting the Gold Rush and ultimately causing the Battle of Little Bighorn.​

There's a treat in store tonight as we head to Fort Hays Chuckwagon supper and cowboy music show located on the film set of 'Dances with Wolves'. (B, D)

Your day begins with a visit to Mount Rushmore, with its famous granite sculptures of Presidents Roosevelt, Lincoln, Washington and Jefferson. You're also going to see the Crazy Horse Memorial this morning.

The highlights keep on coming today with an afternoon tour of Badlands National Park. Here you'll discover an eerie world which has been carved over millions of years by the forces of nature.​ (B)

You're heading into 'wild west' territory today with a drive through the Black Hills to Deadwood, a town created on the back of the Gold Rush. The entire city is a national historic landmark, and there's time for you to have a good look around before we head to Sheridan for the night.​(B)

The highlight of your day is a visit to the historic battlefield site of the Battle of Little Bighorn. A guided tour gives you the chance to relive Custer's Last Stand and get a fascinating insight into one of the most famous battles in western history. ​(B)

After your tour today you'll be able to say that you have set foot in the world's first national park. Yellowstone is a wonderland of spouting geysers, hot springs, boiling pools and bubbling mud pots. On your tour you'll see the extraordinary Yellowstone Canyon with its waterfall twice the height of Niagara and, of course, 'Old Faithful', which erupts every 93 minutes. The park is also a wildlife sanctuary with bears, elk, moose and herds of buffalo all roaming freely, so keep your eyes peeled for sightings.​ (B)

The next national park you'll tick off your list is Grand Teton. Famed for its beautiful landscapes dominated by snow-capped peaks, lakes and glaciers, you can take in these exceptional sights today before we spend the night in Jackson. (B)

Our next destination is Salt Lake City, and our journey here gives us further opportunities to take in stunning scenery. We're going to make a stop at Logan Canyon, whose near-vertical walls of limestone cut through the Bear River Mountains. You'll probably be feeling hungry by now, and our next stop at Bear Lake is where we'll eat our picnic lunch. So find a shady spot by its turquoise waters and tuck in.​ (B, L)

​You can spend today exploring Salt Lake City, which was founded by the Mormons. For easy access to the city's most important sights, a great place to start is the central Mormon Square. If you like, you can take an optional trip to the Great Salt Lake after which the city is named.​ (B)

​Your next base is Cortez, which we reach via a visit to Arches National Park. When you view what is the world's greatest concentration of red sandstone arches, you'll understand just how it got its name!​ (B)

Mesa Verde National Park is also within reach from Cortez, and it's where your tour takes you today. This archaeological masterpiece is famed for its cliff dwellings, with Cliff Palace having more than 200 rooms.​ (B)

Marking the point where Colorado, New Mexico, Utah and Arizona converge, the monument at Four Corners is your first stop today. Next is Monument Valley, instantly recognisable as the setting for many Old West movies. Here you can explore in fantastic company on an optional four-sheel drive tour narrated by an expert Navajo guide.​ (B)

As highlights go, the Grand Canyon is hard to beat, and today is the day that you get to see this iconic natural wonder. It's a breathtaking sight however viewed, but an optional helicopter flight gives you the thrilling chance to see it from the air.​ Stop just outside of the National Park and enjoy a Navajo Taco from the Native Grill supported by our Travelsphere Cares programme, before continuing to Kanab. (B)

There are just two more national parks to go now, and today you'll view the spires of rock and vast natural amphitheatres that form the unique geology of Bryce Canyon.​ Why not join an optional star-gazing tour this evening - with the clear desert skies, this really promises to be a mesmerising experience.​ (B)

A day of contrasts begins with a tour of Zion National Park, to see sheer cliffs and mesmerising rock formations. Equally enthralling is your destination tonight, the man-made wonder that is Las Vegas, where a night tour is one option.​ (B)

We'll transfer you to the airport today for your return flight to the UK.​ (B)

You'll arrive in the UK today.

You'll tick off eight national parks and seven states on this 17‑day adventure through some of the most impressive scenery on the planet. Visit Cheyenne and the former trading outpost of Fort Laramie, a site linked to the Gold Rush and ultimately the Battle of Little Bighorn. Take in the amazing sight of Mount Rushmore and see the Crazy Horse Memorial. You'll head into wild west territory, through the Black Hills, to Deadwood, and stand in the historic site of the Battle of Little Bighorn. Scenic highlights include the chance to witness 'Old Faithful' in action in the USA's first national park, Yellowstone, and natural wonders ranging from huge arches of red sandstone to sheer cliffs and towering trees. You'll discover Monument Valley in the company of a Navajo guide and, for many, the highlight of this tour will be a visit to the iconic Grand Canyon. 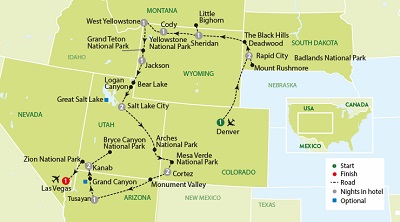 This 13-Mile Scenic Float is a section that is west of the town of Jackson, nestled between the Grand Teton National Park and the Bridger Teton National Forest. Opportunities to spot a moose wading in a back eddy or an osprey diving in the river for a cutthroat trout are abound with the snow-capped Tetons as your backdrop, so be sure to bring your camera for this trip. Binoculars are supplied for each boat. Please note that this excursion is subject to water levels and water flow especially during the month of October.

Please Note: The weather in April/May and October/November can be very cold. Please make sure you have suitable warm clothing and shoes for this excursion.

Visit the shore of the Great Salt Lake, second saltiest body of water on the planet, and learn about its unique environment. Finally, tour the highlights of Salt Lake City itself.

The only way to see Monument Valley is on an authorized guided tour in a four wheel drive vehicle. We use the services of the Navajo Tribe of Native Americans, who will teach you about their heritage and culture, as well as show you the incredible scenery in Monument Valley itself.

Prepare to be absolutely dazzled by the city whose lights beat them all! Get into the mood of this unashamedly brash neon city as we “Cruise” the world-famous ‘Strip’ and downtown area. Soak up the razzle-dazzle from your comfortable air-conditioned coach as we show you the lights and stop for some fascinating sights along the way, all with fascinating facts about this glamorous modern oasis in the desert.

The Cody is located in the heart of the American West in Cody. Hotel facilities include an indoor swimming pool, hot tub and fitness room. Bedrooms have private facilities, microwave, refrigerator, hairdryer, TV and coffee/tea-maker.

Virginian Lodge. Guests can enjoy an evening at the Western-themed saloon bar which offers a dance floor and live music. Rooms are furnished with cable TV, air-conditioning and private facilities.

The Cortez Baymont Inn and Suites in Cortez is located in scenic Southwest Colorado, offering sweeping views of the Blue Mountains. Bedrooms have private facilities, TV, coffee/tea-maker and refrigerator.

Harrah's Las Vegas Harrah’s Las Vegas Hotel & Casino is situated at the heart of the Las Vegas strip. All hotel rooms are furnished with a mini-bar and a TV. 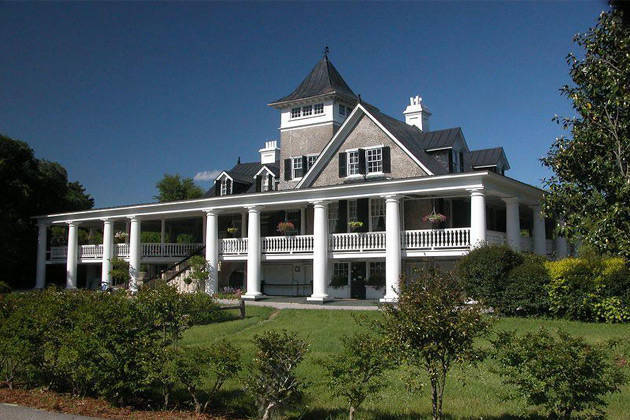 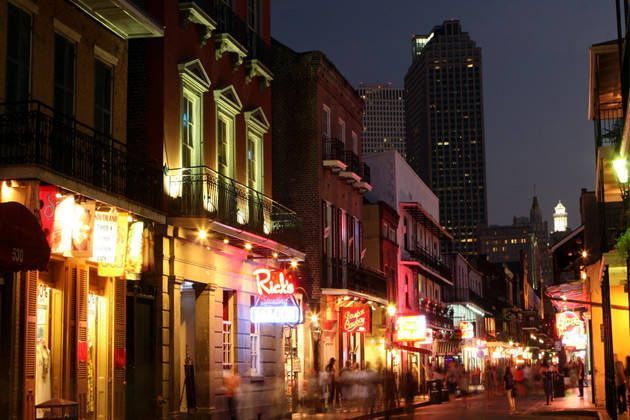 A must for music fans, this exhilarating journey through America’s deep south
more info

Best of the West 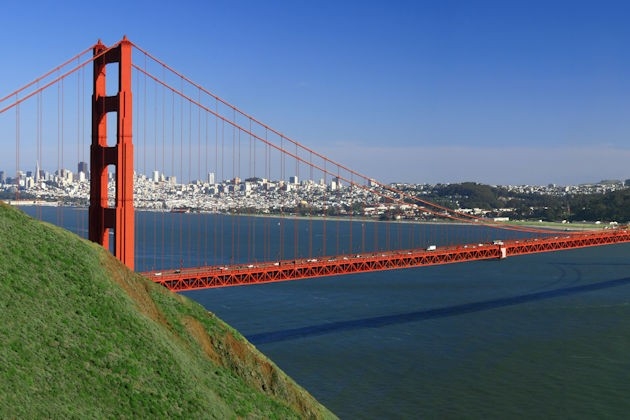 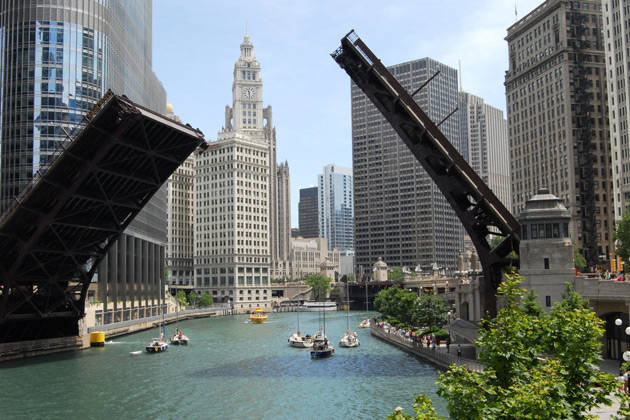 From Chicago, along the mighty Mississippi River and on to New Orleans
more info

Epic Wonders of The National Parks